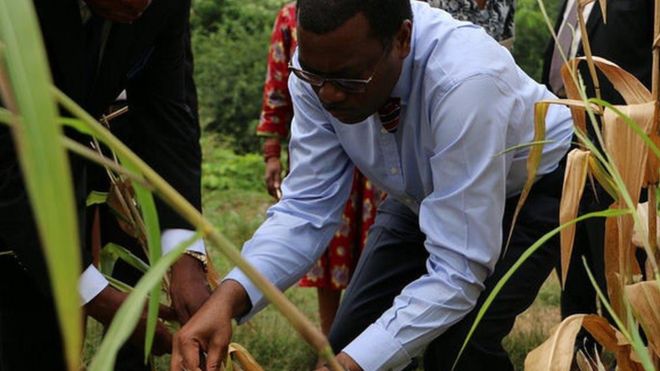 Dr Adesina said providing millions of farmers with seeds and fertilisers was vital to boost development.

He added that 98% of the world's 800 million undernourished people live in Africa.

Since 1986, the World Food Prize aims to recognise efforts to increase the quality and quantity of available food.

Dr Adesina told BBC News that he was "very humbled" to win the award.

"For me, the award is not just about recognition for me, it is also about putting the wind behind the sails of what still needs to be done in African agriculture," he said.

He added that the critical issue that needed to be addressed was that the level of productivity of the African agricultural sector was "so, so low".

"One of the things that I have worked on was how to accelerate our efforts," he observed.

"You know, you can find Coca-Cola or Pepsi anywhere in rural Africa, so why can't you find seeds or why can you not find fertilisers?

"It is because the model that was used to distribute those farm inputs were old models based on government distribution systems, which are very, very inefficient.

"So I thought the best way to do that is to support rural entrepreneurs to have their own small shops to sell seeds and fertilisers to farmers.

"We started these agro-dealer networks and they spread over Africa. It brought farm inputs closer to farmers and it encouraged the private sector into the rural space."

The World Food Prize was founded in 1986 by Dr. Norman E Borlaug, recipient of the 1970 Nobel Peace Prize.

Dr Adesina will receive the US $250,000 prize at the Borlaug Dialogue international symposium, which is held in the US to "help further the discussion on cutting-edge global food security issues and inspire the next generation to end hunger".

President of the World Food Prize Foundation, former US ambassador Kenneth Quinn, said the judging panel hoped awarding Dr Adesia this year's prize would help provide "further impetus to his profound vision for enhancing nutrition, uplifting smallholder farmers, and inspiring the next generation of Africans as they confront the challenges of the 21st century".

Considering what work still need to be done, Dr Adesina told BBC News: " I am really somebody who came out of poverty myself, and poverty is not pretty.

"I know that in order to create opportunities for the several tens of millions of young people in rural Africa today we have to make agriculture a business.