By Sora Halake, All Africa

A recently arrived species of armyworm has spread to 21 African countries and threatens the continent's main food staple, maize, report experts from the U.S. Agency for International Development. 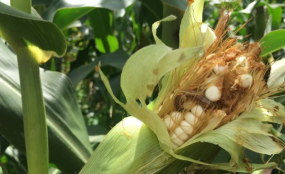 USAID senior biotechnology advisor Joseph Huesing says the fall armyworms -- transported from their usual habitat in the U.S. state of Florida or the Caribbean -- are attacking maize crops all over sub-Saharan Africa.

"From Nigeria and Ghana all the way to South Africa to Ethiopia. The most recent one is South Sudan, which reported fall armyworm infestation toward the end of June," Huesing tells VOA's Horn of Africa service.

Fall armyworms pose a big threat to the continent's agriculture, says Huesing. When they invade a maize field, he says, the pests can eat 30 percent or more of the crop.

They consume other crops too. “We assume that anywhere there is a green plant or maize in Africa, fall armyworms will show up in a short period of time," Huesing says.

Fall armyworms got their name from the time of year when they do the most damage in the northern part of the United States. The first publication describing their presence in Africa came out in early 2016, which suggests the pests had already been there for a year.

For several reasons, the fall armyworms may pose more problems for farmers than the indigenous African armyworm.

Fall armyworms can breed continuously under warm and humid tropical conditions and can feed off more than more than 80 species in 27 plant families, says Yene Belayneh, senior technical advisor for pests and pesticides at the USAID.