Investors are cottoning on to Africa’s digital potential. Building on last year’s record amount of funding secured by African start-ups, this April saw Jumia, ‘Africa’s Amazon’, be valued at over $1.9 billion on the New York Stock Exchange. Meanwhile, Airtel Africa, which is the continent’s second-largest mobile operator, has confirmed its upcoming initial public offering, and is aiming for a valuation of up to £3.6bn, writes Dr. Ousmane Badiane, co-chair of the Malabo Montpellier Panel and Africa Director for the International Food Policy Research Institute (IFPRI). 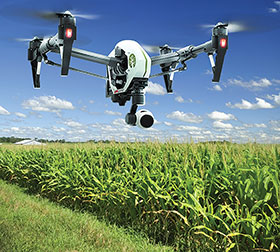 The reason for this enthusiasm? Africa is getting connected.

Africa is outpacing all other continents in the growth of new mobile and internet connections. Those new connections represent vast amounts of new users and customers for digital services.

In particular, Africa’s vast rural population presents a massive untapped market for digital tools and technologies.  After all, agriculture employs over 60 percent of people in Africa South of the Sahara and makes up 15 percent of the entire continent’s GDP. With a rapidly rising population and growing economies, not enough food is being produced currently to feed or nourish everyone on the continent. Despite achieving the fastest rates of growth of agricultural production than any other region over the last two decades, average yields are the lowest worldwide.

Digitalization may address many of the challenges the agricultural sector faces. One is that not enough young people are farming or doing so productively, despite three-fifths of Africans being under 24.

Digitalization provides an incentive for ambitious, younger Africans to get involved in agriculture, especially those with a background in science, technology, engineering, business or marketing. It also promises to improve agricultural output tremendously. The World Bank estimates the value of African agriculture to more than quadruple between 2010 and 2030, rising to $500bn.

That could represent quite a return on investment.

Start-ups in the field are justifying this initial optimism, and are showing that a successful business can come from something as simple as providing farmers access to information about their land. Zenvus, a Nigerian start-up, is providing a service called SmartFarm, which uses a solar-powered sensor to collect information on soil nutrition, moisture, and sunlight for better farm management.

Other start-ups are showing that there is an opportunity to provide farmers with the tools to access financial products to improve their farms, yields, and incomes. For instance, Kenya’s FarmDrive collects data on farmers via mobile phone to build credit scores using a machine learning algorithm, allowing financial institutions to provide them loans for the first time.

Across the continent services are emerging to provide useful data to farmers, improving their access to finance and markets, and help them be more efficient than ever. In the past, these services could only be provided by complex and costly infrastructure and institutional resources which Africa largely lacked. With digital services, Africa can overcome these gaps more rapidly and at a far lower cost.

Investors are confident that digitalization will see huge returns. But how can they best channel this energy?

Insights may be found from a new report from the Malabo Montpellier Panel, which has examined many initiatives by governments from across the continent to nurture the digital rural economy. Three strategies to encourage rural digitalization stand out as particularly effective.

First, African entrepreneurs need to be supported to develop the digital services that farmers will need. Rwanda’s government, for example, is building a digital innovation hub called Kigali Innovation City. This is a pan-African venture that brings together universities, technology companies, and entrepreneurs to create what is already being promoted as the ‘Silicon Valley of Africa’.

Second, investment must be made in the infrastructure needed to connect the rural economy to these services. Accessible electricity, internet access, and communications infrastructure must be rolled out throughout the continent. Senegal has taken initiative on this front, by creating access to mobile networks across the country. The government has worked with new mobile network operators to improve 3G and 4G coverage by 63 percent year on year.

Third, investment to nurture the digital economy must also accelerate market entry by providing incentives for service providers and consumers to trade with one another. This could be by temporarily lowering import duties, providing more affordable internet access, enacting fairer competition standards, or finding ways to lower the overall price for digital services and their associated goods.

If the right investments are made, Africa has the chance to leapfrog into modern agricultural practices. To investors and the people of Africa, this is an unprecedented opportunity.