“If food waste were a country,” says FAO, “it would be the third largest emitting country in the world”. But it is not just the planet that is experiencing a health crisis as a result of our food system.

The prospect of feeding the extra 1 billion people by 2030 will require the scale and pace of food production to increase, placing further pressure on the system.

Reducing the quantity of the food lost during agricultural processes, storage distribution, and that which is wasted by stores and consumers is instrumental addressing both issues. 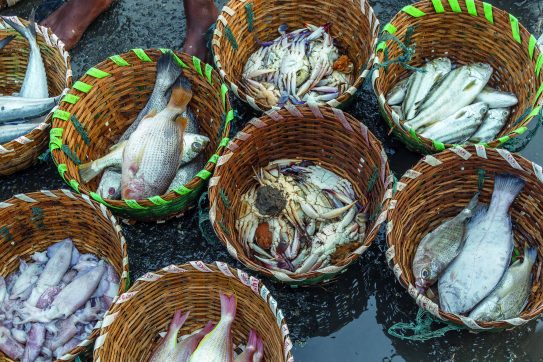 The traditional policy response to ensuring food security has been to promote higher output of staple crops such as grains, tubers and other starchy foods, which provide the bulk of people’s nutrient energy. Although this approach has helped reduce stunting, it has failed to ensure access to healthy and nutritious diets for all. Poor-quality diets have now become the greatest threat to public health, with diet-related factors accounting for six of the top nine contributors to the global burden of disease.

With rapidly rising levels of diet-related ill-health, it is vital to invest in making high-quality diets available to all. The obstacle is that some of the very foods that are critical components of healthy diets (such as fruits and vegetables) are at the highest risk of loss and waste – hence the urgency to look for solutions across the global food system.

The numbers are staggering. It is estimated that more than half of all fruits and vegetables produced, and over 30 percent of the total fish and seafood harvested each year, are lost or wasted. As for meat, about 50 million metric tons of meat produced globally is lost/wasted each year – the equivalent of 75 million cows.

For policies to be effective, it is important to understand where in the food system loss and waste occur. Harvest and post-farm gate handling and processing losses are relatively high in low-income countries, for example where infrastructure (handling facilities, energy for cooling, bulk packaging and transport) is limited and costly. In contrast, food waste in homes, restaurants, and stores generally tends to be greater in high-income countries, due, for example, to bulk purchases of perishable foods, and to excessive portion sizes that are uneaten.

In 2012, the Government of Ghana launched the “Food for All Africa Programme” – West Africa’s first food bank to rescue edible surplus food from stakeholders within the food value chain and supply to vulnerable beneficiaries. The programme aims to create an efficient food supply chain across the continent and lead emergency food recovery.

In 2017, in its National Food Security Policy, the Government of Pakistan included measures to reduce food loss and waste and improve access to safe and nutritious food. It also explicitly that while the public sector should contribute to R&D for reducing losses and waste, the private sector has an important role to play in harvest/post-harvest capacity building. Policy measures include: investments in such as storage, processing facilities, and reliable energy supplies; supporting smallholders that yield economies of scale; and introducing procedures to ensure higher corporate accountability standards to monitor food loss reductions in the processing and retailing sectors.

In January 2019, the UK Government announced a new £15 million-worth pilot scheme to reduce by a further 100K tonnes of food that goes uneaten – which equates to 250 million meals a year. The pilot scheme, which will be launched in 2019/20, will be developed over the coming months in collaboration with businesses and charities to address surplus food from retail and manufacturing.

In both low- and high-income countries, there of policy actions that can help reduce food loss and waste, while improving nutrition. The Global Panel presented some of these examples at an All Party Parliamentary Group event at the Houses of Parliament in London on February 4th.

The evidence is clear: taking policy action to reduce the huge post-production losses in nutrients from the food system, would make a significant contribution to the efficiencies needed to address climate change and to feed a growing world population. Eating more of the nutrient-rich food already produced would result in savings to land, water, and energy consumption tied to food production.

As pointed out in the EAT-Lancet report published last month: “An intended consequence of reducing food waste is the redefinition of how we eat”. Reducing food loss and waste in nutrient-rich foods has the potential to yield substantial nutritional benefits, while offering the opportunity to improve diets, tackle malnutrition and foster healthy and well-nourished societies.