The risk of populism to progress on food security

The rise of populism, seen in the UK’s divorce from the European Union and the USA’s withdrawal from climate and trade agreements, threatens to negatively affect Africa’s ability to improve food security. The deficiency of international cooperation trickled down to the Eleventh World Trade Organization Ministerial Conference, where member states failed to reach agreement on a joint declaration. Issues including agricultural subsidies and public food stocks remained unresolved. 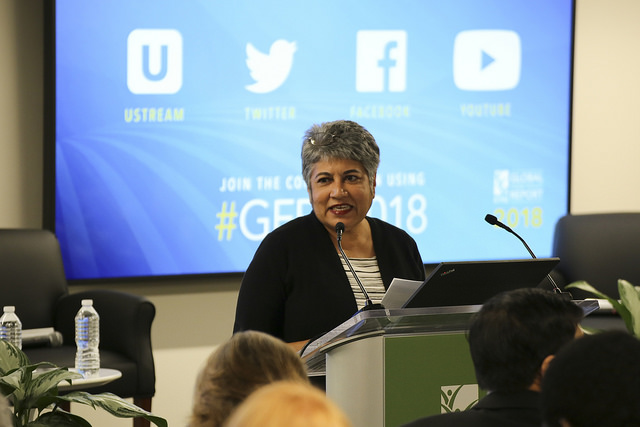 The risks that the rise of populism poses to progress on global food security, and a growing anti-immigration rhetoric that could also harm livelihoods in Africa, were documented in the latest evidence from the International Food Policy Research Institute (IFPRI).

After nearly a decade of decline, global hunger rose from 777 million in 2015 to 815 million in 2016. Conflict and drought combined to create severe food crises, especially across parts of Africa. Extreme weather events in the last year have led to millions of vulnerable people being displaced. IFPRI’s 2018 Global Food Policy Report argues that without global cooperation to enact policies that unite the international community and minimize risks, food insecurity and malnutrition rates could continue to increase.

In the last two decades of globalization policies, the movement of people and businesses was encouraged, and knowledge sharing was critical to reducing hunger and poverty. This is now under threat. In a poll conducted by IFPRI for the report, 66 percent of those questioned thought that anti-globalization policies and rhetoric will harm the hungry and impoverished.

Food systems are uniquely placed to drive improved human and environmental health. Poorly managed they lead to high levels of processed foods – with too much sugar and salt – being available, monopolies and unsustainable environmental challenges. However, models forecast that by shifting to healthy diets, sustainably increasing production efficiency and reducing waste and loss, global food systems can provide healthy diets for 9.5 billion people by 2050 and reduce the ecological footprint of producing food.

The report cites high tariffs, in place in many high-income countries, as the main culprits of depressing global food prices and forcing poor farmers in low-income countries to compete on a level playing field without similar levels of support. It argues that international trade agreements improve nutrition and food security by lowering the average cost of food across the globe and expanding access to more and more diversified foods.

“The real losers from policies that protect farmers at the expense of distorting international prices are low-income farmers in poor developing countries, who suffer lower prices and greater rural poverty. The long-term effects of developed-country farm subsidies on developing countries are particularly pernicious: reducing incentives for production with adverse consequences for food security, nutrition and rural development,” said Joseph Glauber, senior researcher at IFPRI, and former chief economist at the United States Department of Agriculture.

The report also presents evidence suggesting voluntary migration is associated with improved food security for migrants, for the families that remain behind and for the host country. Data from 13 sources clearly linked international migration to rural poverty. What’s more, although making a direct link between migration and food security remains challenging, indirect evidence suggests that in countries with high levels of food insecurity migration leads to greater food security for those families left behind – in El Salvador stunting was lower in migrant households than non-migrant households.

Malabo Montpellier Panel co-chair Joachim von Braun suggests that to address issues of rising populism and migration it is crucial to strengthen the governance of our global food system. Von Braun proposes a solution, in the report, to establish an International Panel on Food, Nutrition, and Agriculture - modelled on the International Panel on Climate Change -  that “would mobilize the related large global research community to provide credible science-based assessments and guidance for more political decision-making.”

IFPRI Director General Shenggen Fan said: “We must encourage an open, efficient, and fair trading system and break the vicious cycle of conflict, food insecurity and migration. The integration of national food systems will be key to progress but will require robust evidence, good governance and strong commitment from the international community.”

The opinions represented in this blog do not necessarily reflect those of individual Malabo Montpellier Panel members and their organizations.