The production of cash crops – grown to sell and make a profit – is often seen as a good way for farmers to get out of poverty. Cash crops like cotton, coffee and palm oil, can earn families money and better satisfy their needs. Farmers who cultivate cash crops and are able to sell them in local or global markets easily are better able to invest in healthcare, buy nutritious food and educate their children. 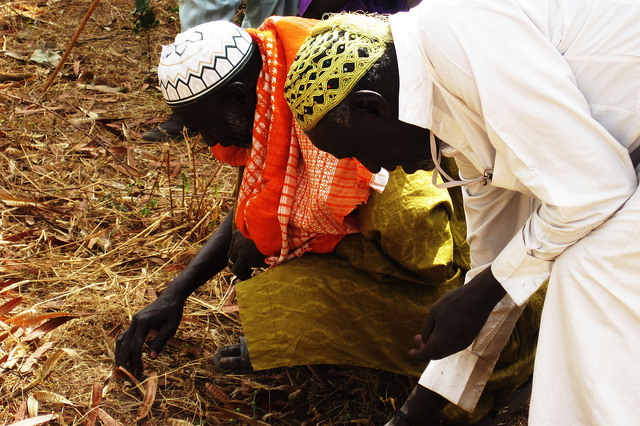 There has long been a debate about the merits of cash crops over food crops – grown to feed farmers and their families with the possibility of selling surplus. Cash crop supporters consider their cultivation a prerequisite for a countries’ agricultural growth and development and critics complain that they expose vulnerable farmers to unpredictable market fluctuations, and thereby compromise their food security.

In Burkina Faso, a boost of farmers cultivating cotton in the 80s raised concerns over food security. Cotton cannot be eaten and so farmers who depended solely on the crop were inadvertently making themselves food insecure.

In the 90s concerns over cash crops dissipated. Evidence indicated that when farmers had access to credit and markets to buy inputs, like seeds and fertiliser, cash crops did very well at improving farm incomes and food production. The issue of competition between cash crops and food crops has resurfaced more recently due to the drastic increase in food prices across the continent and a boom in biofuels – both of which resulted in the large-scale production of cash crops.

Rarely is life black and white and it is clear that healthy agriculture systems contain farmers that cultivate both cash and food crops. In Zimbabwe, cotton farming significantly improved food crop productivity. However, over reliance on a handful of cash crops can have very negative impacts on a country's economy and on farmers and their families.

In Senegal, food crops are in high demand. Households spend a large amount of their income to satisfy their daily food consumption and the country still imports almost half of its cereals, exposing it to global food price shocks. The poverty rate amongst farming households is a staggering 59.8 per cent, well above the national average of 46.7 per cent.

Experience elsewhere, such as in China, has shown that to fight poverty countries must first develop food crops that can be relied upon and ensure low food prices for the most food insecure before they expose farmers to the risky business of cash crops.

Measures, like facilitating farmers’ access to food crop seeds, should be taken to boost agricultural productivity for staple food crops in Senegal. Diversification of food crops is likely to be key to enable farmers and their families to generate surpluses, and thereby lower the local price of food for consumers.

In several countries, food staples have shown to be more effective at generating economic growth than export crops: Tanzanian livestock, Mozambican roots, and all staple foods in Nigeria, Uganda and Zambia.

By boosting the production of food crops, Senegal may meet the needs of its people while also tapping into the potential of crops sold regionally to be exported for additional profit. In Senegal, the agriculture sector is considered to be a driver of poverty reduction, but the pace of poverty reduction may continue to be lower than expected if food production is not prioritised.