The current world population of 7.6 billion is now projected to reach 9.8 billion by 2050. As that number grows, so too do concerns about the environment, development, and food security. World Population Day (July 11) seeks to bring awareness to the challenges ahead.

IFPRI’s International Model for Policy Analysis of Agricultural Commodities and Trade (IMPACT) helps researchers explore the effects of rising population on the global demand for food and on regional dietary changes. As demand for food increases with expanding population and incomes in developing countries rise, the composition of diets will tend toward more nutrient-dense foods. As depicted in the chart below demand for staple crops rises slightly faster than global population, increasing about 50 percent. At the same time, the demand for higher value foods such as meat, dairy, and eggs and fruits and vegetables, will grow 70 and 90 percent, respectively.* 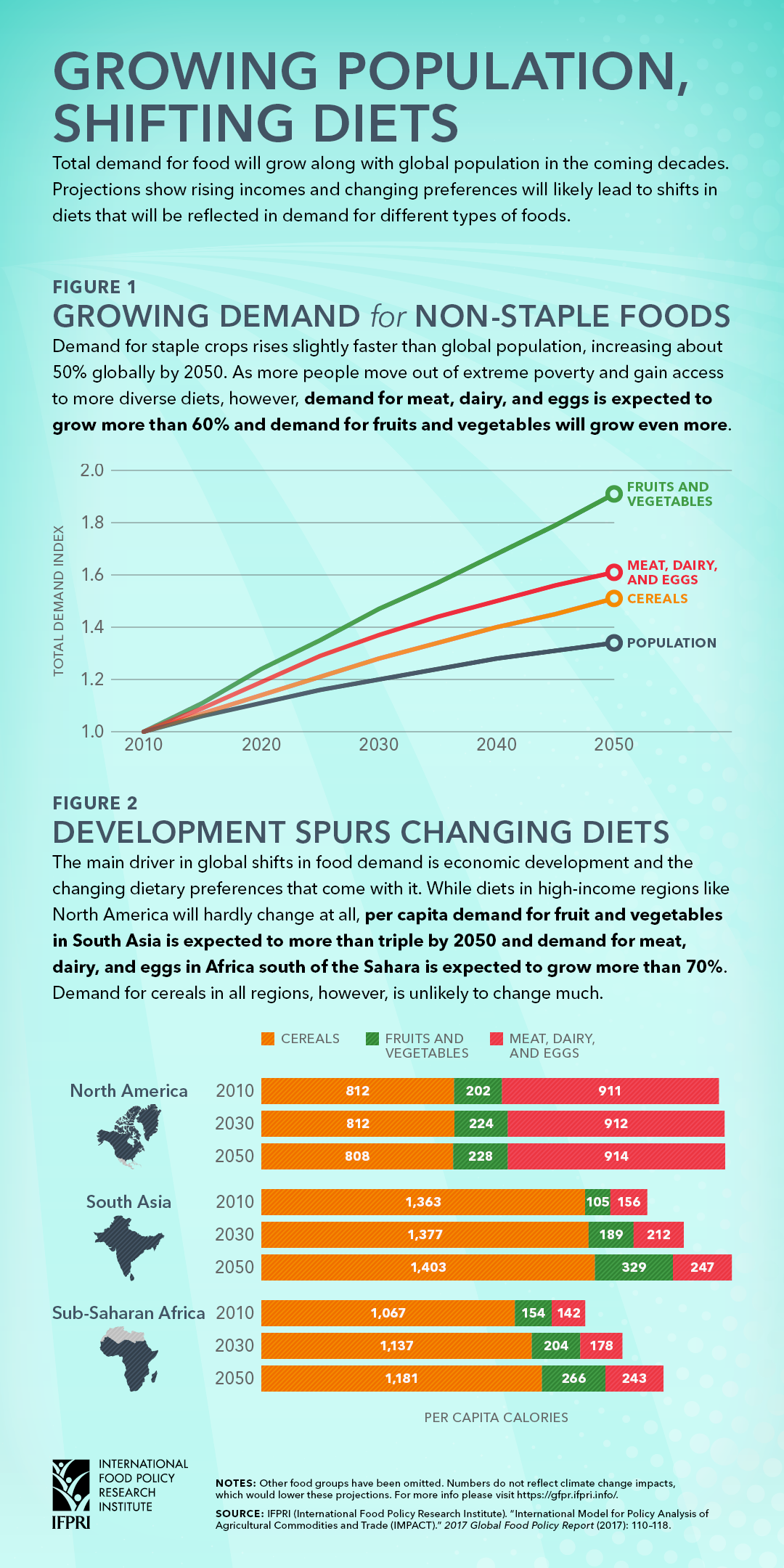 Economic growth and changing preferences are also driving shifts in food demand at the regional level. As shown in the second chart, diets in high income regions like North America are not expected to dramatically change when compared to growing low and middle income regions like South Asia and Africa south of the Sahara. Per capita calorie consumption of fruits and vegetables is expected to more than triple by 2050 in South Asia compared to 2010. Per capita calories from animal products are projected to grow 70 percent in Africa south of the Sahara over the same period.

Most of the population growth in these regions is driven by India and Nigeria. India, the world’s second most populous country with 1.3 billion inhabitants, is expected to surpass China in roughly seven years. Nigeria, with the world’s fastest-growing population, will become the third largest country shortly before 2050. According to the UN, nine countries will account for half of the world’s population growth during this period, with two in South Asia: India and Pakistan, and five in Africa south of the Sahara: Democratic Republic of the Congo, Ethiopia, Nigeria, Uganda, and United Republic of Tanzania.As rising incomes improve access to food for more and more people, current trends in agriculture will present challenges for meeting this demand sustainably. For instance, changing temperatures and precipitation patterns, along with increased weather variability, will likely slow regional growth in food production. There is also limited scope for expansion of crop and pastureland, continuing competition for productive resources, and growing water scarcity. These trajectories—and their implications for food security, nutrition, health, and the environment—could change depending on policy and investment decisions made in the coming decades. Global policy makers, governments, and businesses must work together to increase productivity, encourage and deploy new technologies, improve supply chains, and inspire innovation. More information on alternative scenarios is available in various recent publications from IFPRI, the CGIAR Research Program on Policies, Institutions, and Markets, and Nature Climate Change.

David Richards is is an IFPRI Media Relations Specialist. Timothy Sulser is an IFPRI scientist working with the CGIAR Global Futures and Strategic Foresight initiative (GFSF). Keith Wiebe is an IFPRI Senior Research Fellow and the leader of GFSF.

*These are baseline projections under a scenario of “business-as-usual” future trends, not including climate change, as reported in IFPRI’s 2017 Global Food Policy Report. Climate change slows this progress.