Thierno Souleymane Agne is no ordinary agripreneur. In fact, the 29-year-old is the kind that Africa would love to see more of. Founder of start-up company, Bio-Agripôles, and creator of mobile app Bay-Tech Afrique, he has also introduced organic strawberry growing to Senegal. 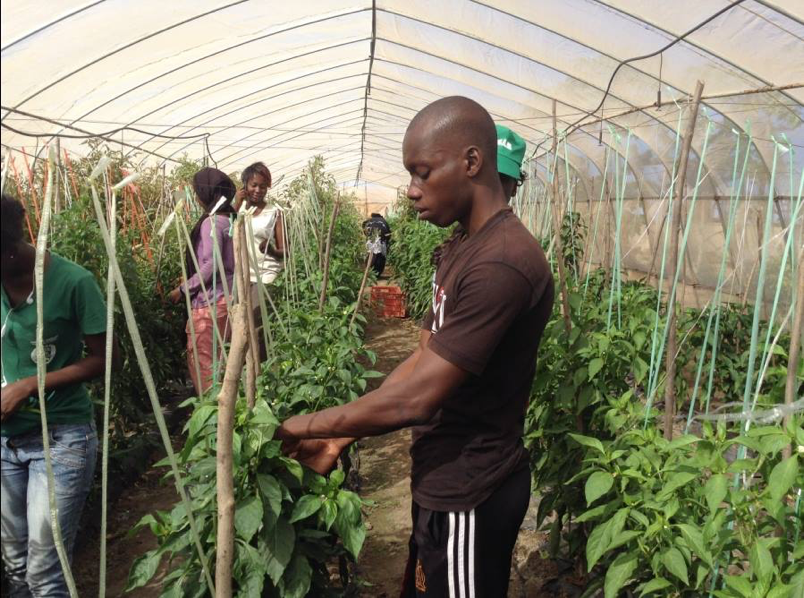 Senegal relies heavily on domestically grown food - with 60% of the population depending on agriculture to survive according to the World Bank. So Souleymane’s entrepreneurial approach to agriculture has been welcomed by many local smallholder farmers, who are always looking for better ways to increase their productivity.

For Souleymane, success is more about his love for the land than the income that he can draw from it:

I have always had this entrepreneurial spirit and have wanted to play a significant role in developing my country’s land and environment in a sustainable way. I even decided to drop out of law school in 2010 to pursue my dream and belief that investment in agribusiness is the best way to reduce food shortages in Senegal

During his horticultural training, Souleymane teamed up with three classmates to develop an organic farming project named “Naatangué”: meaning abundance, peace and happiness. This won him an award during the Great Entrepreneur TV contest organized by the British Council and the Embassy of the United Kingdom in Senegal and the French government’s Entrepreneurship award Prix du Forum Jeunesse.

An information service app for farmers

One of his creations is the smart digital app Bay-Tech Afrique which includes guides on choosing which crops to grow and translates SMS and audio information on phytosanitary treatment for the control of plant diseases especially in agricultural crops, and fertilization. It can be used with or without access to the internet. In future versions, additional features will include a detection and alert system to inform farmers about harmful insects. Farmers will also get information on how to measure the NPK (nitrogen, phosphorus and potassium) content of the soil, analyze water levels and identify crop anomalies. The app will create linkages between farmers and shops selling agricultural equipment. It’s been designed so that farmers don’t need training to use it and the information is available in an audio format so it can be used by people who cannot read and write.

In a recent interview with the Soleil newspaper, Souleymane explains:

With this application, the farmer has different possibilities. For one who has targeted a crop and doesn’t know how to grow it, he will just have to enter its name, for example, hot pepper, to receive all the technical information concerning hot pepper, specifically, its needs in nutritive elements, its type, its PH and the recommended structure of the soil, climate, period and ideal environment for planting the targeted crop.

His latest venture is the award-winning company Bio-Agripôles, which aims to support farmers in organic agriculture using a series of digital platforms and tools.

Through Bio-Agripôles, Souleymane has helped smallholder farmers like M. Guisse to install drip irrigation systems. M.Guisse’s productivity on his three-hectare farm just outside Dakar declined drastically a few years ago. Now, he grows more than 1000 hot pepper plants and has achieved a much-improved yield from his mango and other fruit trees.

Bay Seddo (grow and share) is another web platform created by Souleymane’s firm that links farmers with investors. The objective is to allow individual farmers to buy parts in a field for one to two crop rotations from a landowner and then share the dividend. This allows the owner to make a profit from land that would otherwise be left unused as well as increasing farmers' incomes. At the end of the growing season, Bay Seddo takes charge of the distribution of the dividends between the different stakeholders following predetermined criteria. There are now Bay Seddo fields in Mboro and at Gaston Berger University in Saint-Louis in the north of Senegal that employ 10 permanent and 7 temporary workers. These farms have earned a healthy profit thanks to Bay Seddo.

A training center for young people

Conscious that agriculture requires skilled people, Souleymane and his partners have also created a training center for agricultural and agri-food occupations. He said:

We choose young people who didn’t have the chance to succeed at school. We train them for three months and send them on internships for a further three months. We then provide them with an employment contract in the farms that we support. We open bank accounts for them to receive their monthly wage. Some become farm managers and others farm workers depending on their previous experience.

A pioneer and champion of organic strawberry cultivation

In 2013, Souleymane decided to try growing local organic sweet strawberries - a challenge for a rare crop in Senegal where water is scarce. On 2000 square meters in the region of Tambacounda he took the plunge and decided to grow the foreign, historically imported, and popular fruit organically and without any chemicals.  Against the odds, it was a success. This led him to continue to demystify the challenge of growing strawberries in Senegal. He now advises other farmers who want to follow his steps about how to cultivate strawberries.

I am very satisfied with my new career. I enjoy working with growing numbers of farmers in need of smart tools and we are passionately developing ways to raise their productivity. My sweet strawberries are also in high demand, its encouraging.